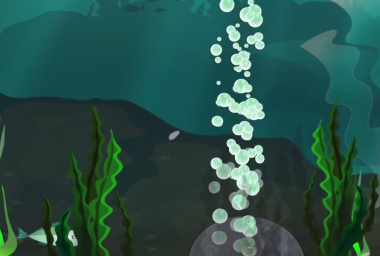 Aeration Systems and the Benefits of Bottom UP Aeration vs Surface Aeration, Fountain Aeration or Bubblers

Aeration is the process of adding oxygen to water.  This is a key component in the success of keeping ponds healthy and clean.   Oxygen supply levels are also core to rapidly and effectively rehabilitating and restoring bodies of water back to their natural eco-state.  A healthy body of water provides the necessary oxygen so that fish can thrive and the risk of fish kill dramatically reduces.

Adequate oxygen levels are required by the bacteria  (in our case introduced by Nature’s Pond Conditioner™)  to allow their respiration reactions to proceed rapidly.    Without sufficient amounts of oxygen present in a lake or pond, bacteria are not as efficient in duplicating and biodegrading existing organic matter (organic matter is typically found in the form of pond sludge) that settles to the pond’s bottom.

With sufficient oxygen levels, the pond sludge layer that forms at the bottom of water will biodegrade into carbon dioxide.   Since a large portion of the sludge found in our ponds and lakes is biodegradable organic carbon matter, much of the sludge can be decomposed quite quickly when oxygen is combined with an effective bacteria and enzyme blend such as Nature’s Pond Conditioner™.

“Bottom up” aeration systems are compressing oxygen directly into the water body from the bottom of the water column upwards. Using both coarse and fine bubble diffused aeration systems are the most effective way to transfer oxygen into the water by creating small bubbles.  As the bubbles travel through the water column, oxygen is transferred across the bubble's surface and into the water.   Studies have shown that bottom up aeration has an oxygen transfer rate up to 10 X more than surface aeration.  For example, at 10 FT of water up to 16% of the oxygen can be dissolved into water and at 15 FT of water over 20% of the oxygen diffused can be dissolved into the water compared to Surface aeration that typically ranges between 1.6 and 3.2%.

There are several types of surface aeration systems available in the form of bubblers, fountains and agitators.

Surface aerators work in the opposite way as bottom up aeration does.  By creating small droplets of water that is pushing water from a few feet under the water’s surface up into the air.  Bubblers of jets will perform in the same way as fountains however will just bubble the water onto the surface and circulate it around the pond.  These droplets of water that are created by these fountains are pushed into the atmosphere above the ponds surface. Oxygen in the air is transferred into small water droplets which then fall back into the water.  Some disadvantages to this approach of aeration are:

Oxygen transfer rates and efficiency (OTE) of a diffuser system is a function of its depth in the ponds. The deeper the air diffusers are then the more efficient the OTE.   OTE rates are approximately 1.6% per foot of depth.  So at 10 FT of water you receive an OTE rate of 16% for bottom up aeration.   If Surface Aeration is only the first 1-2 FT of water then you only get an OTE rate of 1.6-3.2 %.

Result is that bottom up aeration is 5-10 X more effective than surface aeration.

“Bottom Up” Aeration is the best way!

These systems pump air into the water and through air diffusers that lie at the bottom of the pond, lake, or dugout. This achieves total pond aeration from the bottom up to the top regardless of the depth of the water. These systems are more effective and economical, for it requires far less energy to push air in a diffused aeration system than it does pushing water through fountains or jets.

They are designed so that up to 2000 ft. of airline can be run right to the diffusers in the water and you do not have to worry about the costs and safety requirements of running electricity from the power source right into the pond water as with surface aerators.

By harnessing the wind or using bottom up electric aeration you can oxygenate and de-stratify your pond. Our line of aeration systems have been designed to provide adequate oxygen levels to improve the health of your ponds, lakes, dugouts or reservoirs.

Bottom up aeration systems will:

Surface Aeration - are systems that come in the form of fountains, bubblers or jets and are primarily used to produce surface level oxygen in the water. They splash the surface and help control top level algae and weeds, they do not aerate down to the bottom. This type of aeration looks attractive but as research indicates, is one of the most ineffective ways to keep your water clean and fish healthy. Oxygen never gets to the bottom of the water where it is needed to organically break down the sludge that constantly enters the water and sinks down.

The Joy of Koi

This blog discusses the history of koi, tips and care suggestions, and how to keep a koi pond clean and clear.