Mar
17
Koenders Windmills Are Great for the Environment, and Now There is Proof! 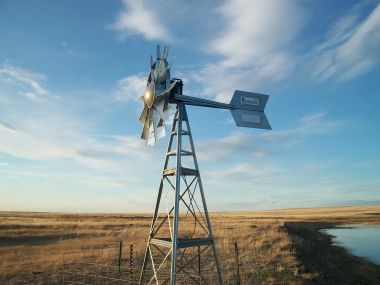 Everyone knows that windmills are environmentally friendly, they use the wind, so how much friendlier can it get?

As plants die and sink to the bottom of the pond, aerobic bacteria decomposes the organic matter. In so doing, it burns up the supply of oxygen in the water. When the oxygen is used up, anaerobic bacteria continue the decomposition, but at a slower rate, and in the process produce hydrogen sulphide gas which eventually contaminates the water. By adding oxygen back to the water it boosts the natural cleansing cycle which already exists.

The traditional market has been to farmers who want clean dugout water. In recent years, Koenders have been in partnership on some projects with Zirkon Research of Edmonton, who are experts in waste water and landfill remediation. Windmills have been installed in many community waste water lagoons and landfills, the addition of oxygen accelerates the natural decomposition process.

Before the windmills were installed in community sewage lagoons, the first smells of Spring were always the lagoons. Now that oxygen is injected throughout the winter, the whole thing is more ‘nose friendly’.

Methane production is a natural part of the degradation within a landfill, the windmills extract the methane, inject it into biofilters which converts it into carbon dioxide. Methane is 10 times more harmful to the atmosphere than carbon dioxide so these windmill installations are really playing their part in trying to address the concerns about ‘global warming.’

For several years now people have been talking about carbon emissions, carbon credits, global warming and damage to the ozone layer. The dictionary defines a carbon credit as: a tradable credit granted to a country, company, etc., for reducing emissions of carbon dioxide or other greenhouse gases by one metric ton below a specified quota.

What Are Carbon Offsets and How Do They Work?

Offsets are typically achieved through financial support of projects that reduce the emissions of greenhouse gases in the short- or long-term. The most common project type is renewable energy, such as wind farms, biomass energy, or hydroelectric dams. Others include energy efficiency projects, the destruction of industrial pollutants or agricultural by-products, destruction of landfill ethane, and forestry projects. Some of the most popular carbon offset projects from a corporate perspective are energy efficiency and wind turbine projects.

What is a Life Cycle Inventory?

A product’s cycle starts when raw materials are extracted from the earth, followed by manufacturing, transport use and its ultimate final disposal or recycling. At each stage of a product’s development and use, it consumes energy and creates greenhouse gases. The Life Cycle Inventory measures the energy used and greenhouse gases to see how long it takes for that product to have a net positive effect on the environment. So, whilst common sense tells that windmills are a positive effect on our environment, it cannot be proved until the process of materials acquisition, manufacture, distribution and disposal are analysed.

The results were measured as ‘Payback Time’:

The Results of the Life Cycle Inventory

The Energy Payback Time for a Koenders wind-powered aeration system is at least 4.5 years and the resulting Energy Payback Ratio over 15 years and 25 years of operating life is 3.3-fold to 5.6-fold, respectively.

The Greenhouse Gas Emission Payback Time is at least 2.1 years with the resulting Emissions Payback Ratio for 15 years and 25 years amounting to 7.2 fold to 12.0 fold.

Everyone is becoming more aware of the environmental impact that industrial practices and personal lifestyles are having, and many companies are now starting to address that issue. Koenders Water Solutions was ‘green before it was cool to be green’ and have always extolled the virtues of keeping water clean and healthy by using the power of the wind.

It’s no good having a windmill which keeps water clean but puts vast amounts of pollution into the atmosphere whilst its is being made. So we asked ourselves the question: “Are Koenders windmills just good for water quality or are they good for our environment?” Life Cycle Analysis gave us the opportunity to quantify the environmental impact that a windmill has on the environment all the way from ‘cradle to grave’.

“Without proper management, a farm dugout provides good quality water for only the first 5 years, over the next ten years, storage capacity and water quality have usually been reduced to the point where the dugout no longer meets the needs of the landowner. The lifespan of a dugout can be extended considerably through effective management” Source: “Quality Farm Dugouts.” Agriculture and Agri-Food Canada

Many ranchers are discovering the benefits of windmill aeration, including Jim Barret, owner of Barret Ranch in Venus, Florida. “Our windmill pond aerator paid us back in ten days and is saving us $30,000 a year in avoiding water hauling and energy costs.” Says Barret. ‘We could add hundreds of thousands of dollars to our bottom line by keeping our herds healthy and preventing catastrophic loss with good water. We’re expanding now.’ Barret chose Koenders’ windmill aerators to clean up the first of twelve ponds on his ranch. “Within 30 days, the water was clean enough to put catfish in”, says Barret. “Not long after that we had the water tested, and it was fine for our animals. Now it’s crystal clear and I could drink it.”

A study by the Western Beef Development Center in 2000 showed that calves that drink aerated water from dugouts tend to eat more, resulting in additional weight gains of 1/3rd lb. per day.

Fed Taylor, a beef farm owner in Blackstock, Ontario, Canada uses a Koenders pond windmill aerator to supply fresh water to his cattle. “I have it rigged up so it pumps water into a barrel, then recycles into the pond, so in the summer my cattle have instant clean water 100% of the time,” explains Taylor. “Another reason we put the windmill in… we had to figure out a system to keep the cattle away from the main source of water to keep a fresh supply.”

“Our pond was stagnating and producing a terrible smell”, says Marilyn and Normand Clay, cattle farmers in Saskatchewan, Canada. “Even after using large amounts of chemicals to keep the water clean, it was still not up to standard, that’s when we installed a windmill aeration system. Within weeks of its installation, the system was able to improve the water quality to a point where it tasted clean and sweet. The windmill aeration system has bene one of the best purchases on our farm.”

The City of Muldrow, Oklahoma

The advantages of wind-driven aeration were recently realized by the City of Muldrow OK, in their waste management pond, which is located next to a high school and a community baseball field.

“When the weather started changing, the water would start getting septic,” says David Taylor, Muldrow City Manager. “The smell would become pretty bad” After learning about windmill aeration from a nearby farmer, The City of Muldrow teamed up with Koenders Windmills to use two 20-ft windmills in a trial basis with positive results. “The oxygen level is well up in the pond,” Taylor says. “The smell has gone way down. We have lots of turtles out there, when you’ve got lots of turtles in a holding pond that indicates your water is in pretty good shape. We’ve got lots of ducks and geese landing on it too.”

Many farms in the Peace River Region rely on dugouts for their drinking water and household water supply. Dugouts are replenished in most years from rainfall and snowmelt runoff. Unfortunately, the runoff contains a high level of nutrients which are deposited in the dugouts. These nutrients and especially the phosphorous case excess algae and weed growth. This abundant plant growth seriously affects dugout water quality.

Aeration assures an adequate level of dissolved oxygen in the water to control taste, odor and maintain good water quality.

The windmill was installed in Mr. Dechant’s farm in March, the Dechant’s had not been using the water since the previous December. The water quality improved quickly and they began reusing the water within two weeks of the installation a standard natural gas flow meter was installed in June to measure the volume of air pumped by the windmill. The windmill pumped approximately 45,000 cubic feet of air per month or 1 cubic ft. per minute. Tests showed that wind speeds of 7mph were required to stat the windmill and 4mph to keep it operating.

Over the 1.5 years the windmill pumped approximately 1 cubic ft. of air per minute. This air volume is ideally suited for maintaining adequate dissolved oxygen levels in farm dugouts.

Nature's Pond had the opportunity to give our expert advice on maintaining septic tanks on a blog article posted by Redfin.com. Here is the complete article.

THE SCIENCE BEHIND NATURE'S POND CONDITIONER Nature’s Pond Conditioner was created to reduce the effort, complexity, and annual expense of caring for bodies of water. As a company, we are forever committed to providing products that are safe for all and environmentally friendly. But what makes our Nature’s Pond Conditioner work and what makes it different from chemical-based approaches?