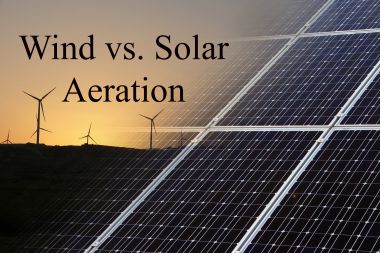 Renewable energy alternatives are in high demand all over the world.  It is both environmentally friendly and in many cases, it saves you money.   Instead of paying for electrical bills to aerate your water, alternative energy aeration solutions can be used in its place.

Researchers predict that in the coming decades renewable energy will fuel the majority of our power requirements, dramatically reducing our dependence on fossil fuels and ushering the planet into the next industrial revolution.

When it comes to aeration there are three different kinds of energy sources being used; wind, solar, and electric. Depending on your location and climate either source may work better for your pond water. But if faced with the decision between wind and solar, which one is the better choice?

Consistency of airflow is one of the most crucial factors the you need to consider when choosing an aeration system that is right for your pond.  For aeration to have the greatest impact it needs to be diffusing oxygen into the water as much as possible during any given month or day.

Electrical aeration is measured in CFM (Cubic Feet per/minute of Air). With wind and solar aeration CFM is a measurement over a longer period of time (Cubic Feet Per Month of Air Volume).  Wind and Solar are variable sources of power that are predictable over historical monthly averages that are taken from both wind and average daily sunshine maps so they cannot be measured by the minute.  To measure performance of wind and solar aeration systems by the minute would be inaccurate.

When comparing the aeration performance between solar and windmill aeration we must look at the following key factors:

1. Weather characteristics of where the pond is located

What are the average wind speeds in that area (gathered by global wind map data available around the world, day or night the wind will blow)

2. Back Pressure measured in PSI

Depending on Windmill Aeration Technology – Koenders Windmills can typically perform well up to 15 PSI which is about 30ft of water with little degradation in output of oxygen. The deeper you go the higher the winds will be needed to push oxygen down to bottom of the pond. That is why we calculate that the optimal depth for windmill aeration is 20 FT or under.

Depending on the Solar Aeration Technology it can typically perform at its best in shallow waters 10ft and under.  The reason for this is the back pressure that is placed on the system requires more energy for the motor to push the air down to the depths needed. The harder the motor has to work to push the oxygen down the higher the temperatures it operates at. The deeper you push the oxygen, the more sunshine required to power the motor.  Reliability becomes a factor with any motor operating under hot conditions.

Wind is Calculated to be 7.6 X more efficient than Solar if you follow this scenario.  This scenario is in a moderate to high wind regime compared with an average daily sunshine factor of 6-8 hrs per/day 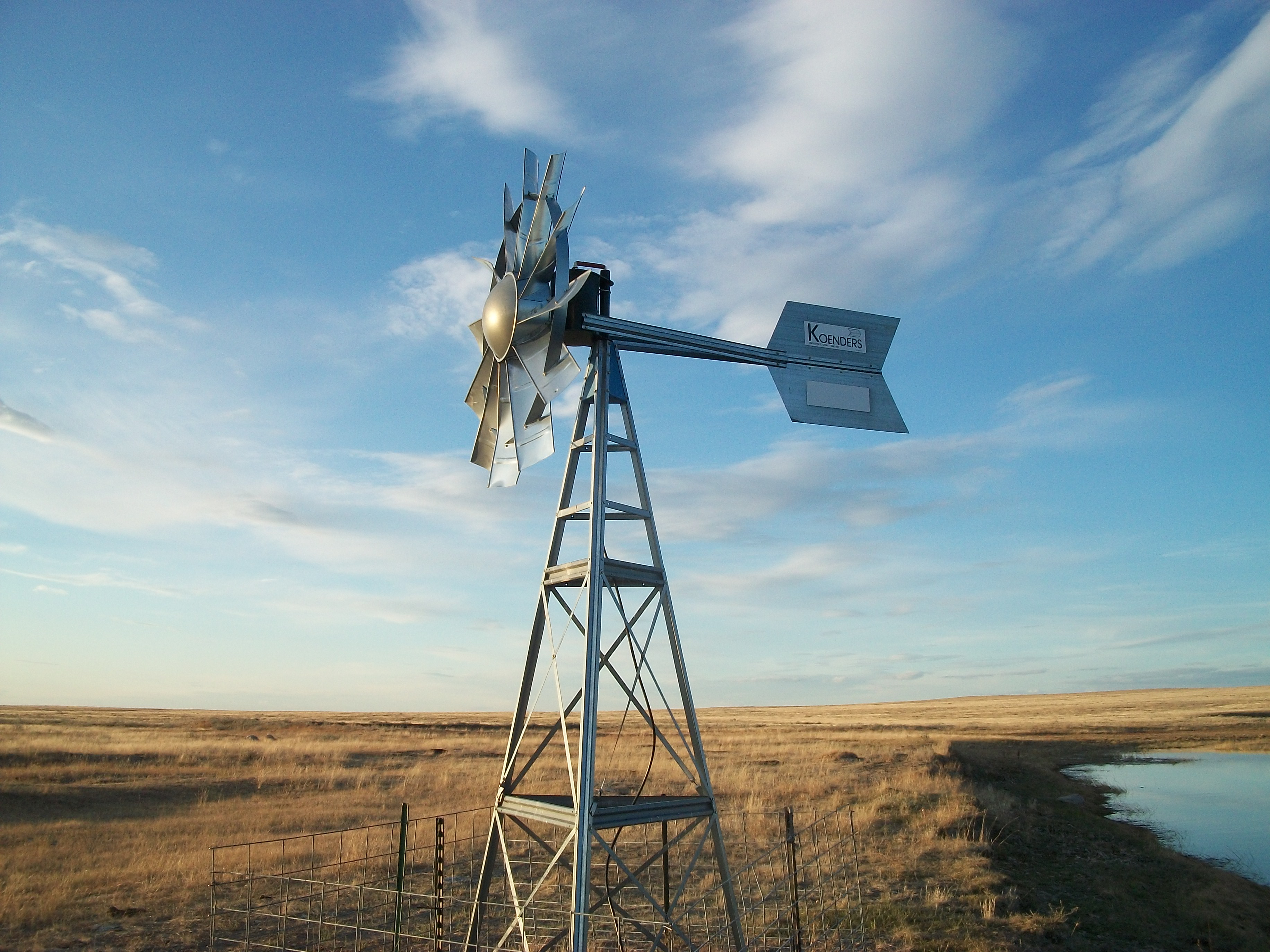 Calculated over the 20-year life of a Koenders Dual Diaphragm Windmill – the most advanced windmill aeration technology in the world.  We calculate a minimum cost per/CFA (Cubic FT of Air) of $0.00025 USD per CFA.  A total cost of $ 3,000 -$ 6,000 USD (depending where you are in the world) for the windmill aeration system including maintenance over 20 years divided by 12,000,000 million cubic feet of air produced during that period.

Calculated over the same 20 Year period is difficult because the average life expectancy of a solar motor is between 1 and 2 years.  If we take 2 years and multiply it by 10 replacements over that period of time we receive an initial cost of $3,000 - $6,000 for a direct drive system (no Batteries). On top of this cost we have an additional $750 -$ 1,500 U.S.  every 2 years X 10 plus additional maintenance costs of $ 100 – 200 per/year for miscellaneous costs and labor to fix the system.  A minimum total of $ 11,500 for the performance of a similar sized aeration system compared to the Koenders Dual Diaphram Windmill aeration system.   That similar sized unit will only produce approx. 6,000,000 CFA.  We calculate a minimum cost of $0.0019 per CFA. The total cost of ownership of a Solar aeration system over a 20 year period is substantially higher than a Koenders Windmill aeration system.

Efficiency factors will change depending on location where the pond water is located.  Many factors will be taken into consideration when you are comparing wind and solar aeration however for most applications - Even in low-moderate wind locations Windmill Aeration is at least 3-4 times more efficient than solar based on a CFA basis. 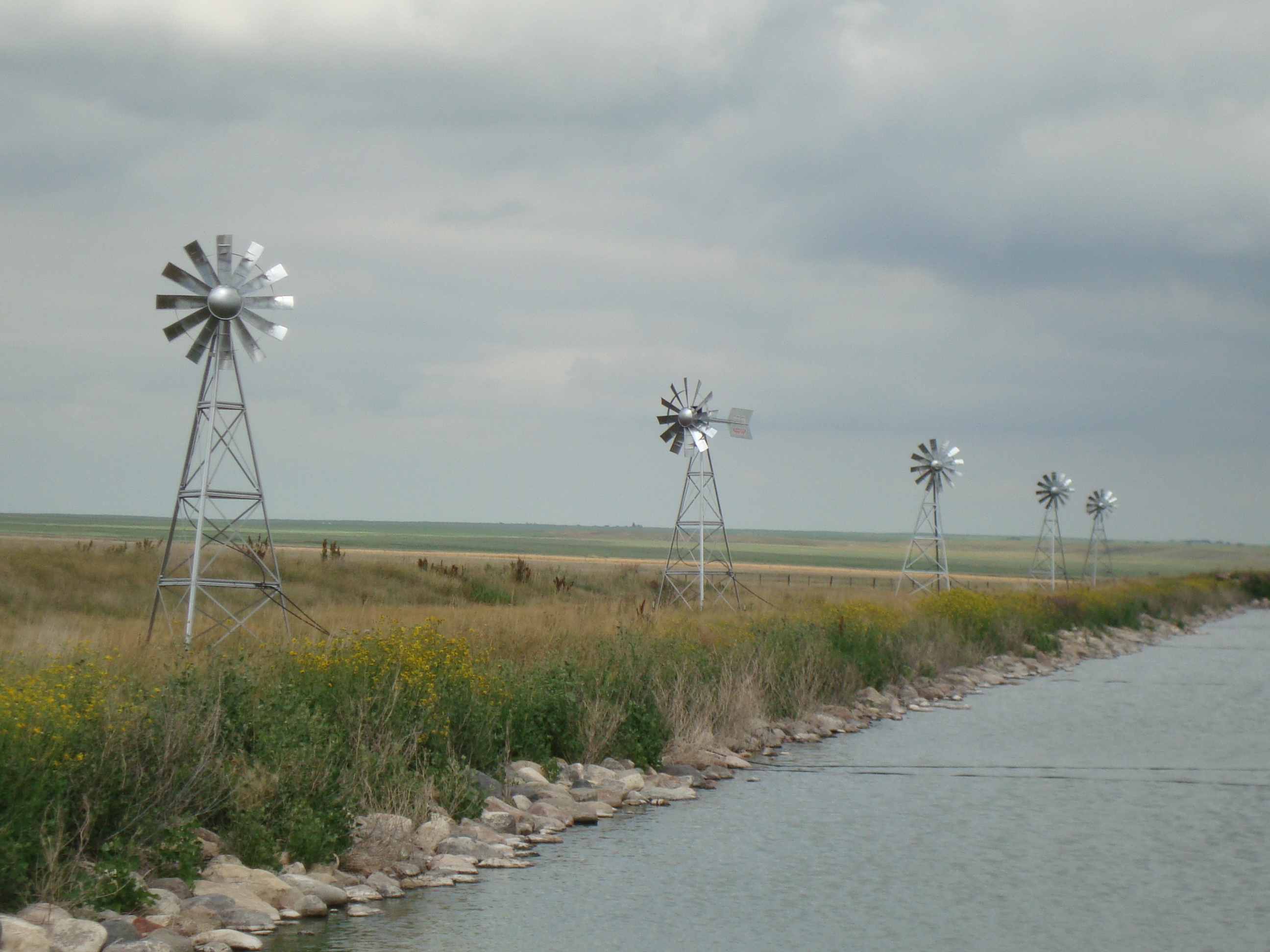 We have used the Koenders Water Solutions Windmill Aeration technology to compare with Solar for this company has over 100,000 windmill aeration systems installed around the world and owns close to 90% of the market.  Koenders technology does not use a motor in its design, it’s a patented diaphragm based system that works in 3-5 MPH winds and has only a few moving parts thus increasing reliability and reducing maintenance costs down to almost nothing over a 20-year period.

Solar technology requires a motor to pump the oxygen into water. With this you need to install both a Linear Current Booster and Solar Panels. The motor and the LCB booster are the main points of failure with the motor having many moving parts. Motors are typically operating at high temperatures so motors are the main point of failure for these operations.  Average time between maintenance is 1-2 years and costs can be high.

One of the biggest downfalls of solar aeration is that the sun does not shine 24 hours a day. This can be a serious problem for aeration because the most critical time of day to aerate is actually at night and the early hours of the morning. This is due to the natural fluctuation of oxygen levels in the water.

Without aeration bodies of water are oxygenated through photosynthesis from aquatic plants, similar to how plants outside use the energy from the sun to convert co2 to oxygen. Aquatic plants are a little different because there is not as much co2 or oxygen in water as there is in air and they receive less sunlight due to cloudy water or anything else shading them. All plants require a little bit of oxygen to survive, even though they can produce it themselves through photosynthesis. Photosynthesis can only happen during the day when the sun is shining so at night, aquatic plants begin to take in oxygen which can take away from other organisms in the water.

Not only does the time of day have a huge impact on solar aeration performance but so too does time of year. Certain times of year have shorter hours of sunshine during the day and in the Northern States and Canada these happen to be during the winter months when the water is at its lowest oxygen levels and its water surfaces have frozen over.

With Solar aeration, you can design a battery back up system to ensure that your water is aerated during the night time as well as on cloudy days. However, the cost and additional reliability, maintenance and complexity of this solution increases dramatically.  Eg. 2-3 times more expensive compared to direct drive.

Koenders Windmill aeration systems only need 3-5 mph/hour winds to provide oxygen to the diffusers at the bottom of the pond.  Even in low – moderate wind regimes these windmills will operate enough of the time to be highly effective.  Even when it feels like there is barely a breeze, the windmills are much higher up where it is easier to harvest the power of the wind.  Wind can occur in the day and at night so aeration is available at the time its most needed without the use of batteries.

Wind and solar technology is improving every day. People are recognizing the importance of renewable energy and its becoming more available and affordable to people all over the world.  When it comes to pond and sewage aeration wind is predominantly used over solar in almost all circumstances around the world. That being said, no matter what technology you use to aerate your pond, one thing is for sure: water that is aerated is much better off and so are the fish! 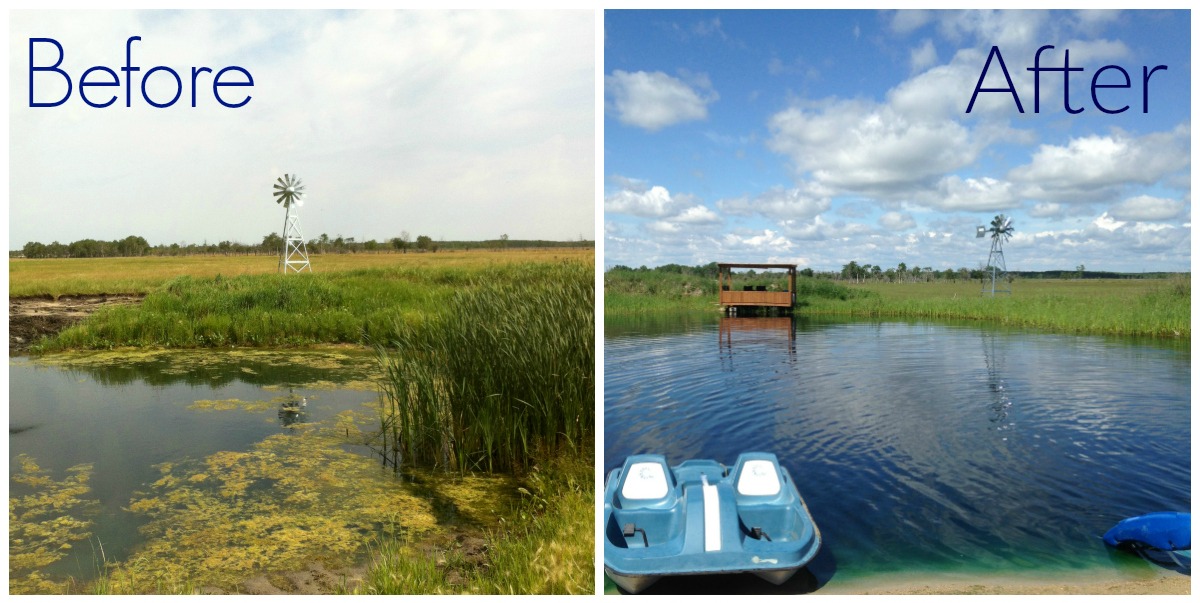 Koenders Water Solutions has been leading the aeration industry in renewable energy sources. They manufacuture wind, solar, and electric aeration systems, and provide this article purely as a tool to help consumers understand the differences between these renewable driven systems. This article is not meant to highlight weaknesses of one renewable source over the other, for they beleive both have a role to play in cleaning our water and improving the environment.

Nature's Pond had the opportunity to give our expert advice on maintaining septic tanks on a blog article posted by Redfin.com. Here is the complete article.

THE SCIENCE BEHIND NATURE'S POND CONDITIONER Nature’s Pond Conditioner was created to reduce the effort, complexity, and annual expense of caring for bodies of water. As a company, we are forever committed to providing products that are safe for all and environmentally friendly. But what makes our Nature’s Pond Conditioner work and what makes it different from chemical-based approaches?